Easy Rider – If You Want to Be a Bird (Bird Song) 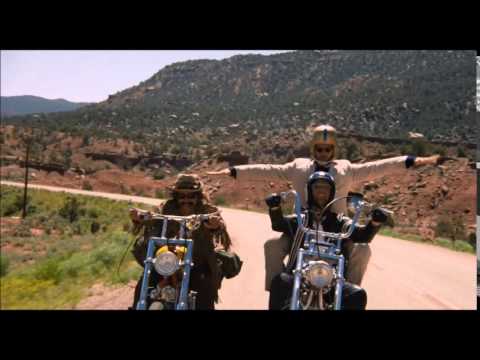 The movie “Easy Rider” was released 49 years ago today. Here is an article Nick Scelsi wrote for us a few years back. Really cool info on the movie:

When Dennis Hopper and Peter Fonda needed the perfect song to play over the closing credits of their landmark counterculture film Easy Rider, released on July 14, 1969, they asked Stephen Stills to write a song specifically for that purpose. The song Stills wrote was “Find the Cost of Freedom.” “I played it for Dennis,” Stills remembered, “but he was in a fog and just didn’t get it. I was depressed about that for years.”

The filmmakers then approached Bob Dylan, hoping he could provide the ending to their “touchstone for a generation.” Dylan was reluctant to get involved, refusing even to allow his own recording of “It’s Alright, Ma (I’m Only Bleeding”) to be used in the film’s soundtrack (the version in the film is actually a cover by Roger McGuinn), but he did agree to write a little something for the ending. It literally was just a little something. Instead of writing a complete song, Dylan simply wrote out the first verse of what would become “Ballad of Easy Rider” and said, “Give this to McGuinn. He’ll know what to do with it.”

Fonda and McGuinn had been friends for years. It’s a story for another day (August 24, to be exact), but it was Fonda’s extremely odd behavior during a legendary 1965 acid-dropping incident involving members of the Byrds and the Beatles that inspired John Lennon to write “She Said, She Said.” Interestingly, it was the acid-dropping cemetery scene in Easy Rider that inspired McGuinn to want to contribute music to the film’s soundtrack.

While shooting the cemetery scene, Hopper had been able to convince Fonda to talk to the statue of the Madonna as though it were Fonda’s mother (who had committed suicide when he was 10 years old) and ask her why she had left him. Later, Fonda used the inclusion of this scene as leverage to persuade McGuinn to allow the use of his cover of Dylan’s “It’s Alright, Ma (I’m Only Bleeding).”

Byrds music would feature prominently on the Easy Rider soundtrack album, which also included their cover of Goffin-King’s “Wasn’t Born To Follow,” originally released on The Notorious Byrd Brothers album, as well as McGuinn’s own solo recording of the completed “Ballad of Easy Rider.”

There are some who believe The Byrds connection to Easy Rider goes far deeper than just their music, insisting that the film’s two principal characters, Peter Fonda’s “Wyatt” and Dennis Hopper’s “Billy” are, in fact, loosely based on the personalities of Roger McGuinn and David Crosby.

What do you think? Could there really be something to this theory?

Led Zeppelin – The Greatest Rock Band Ever? | This Day In Music