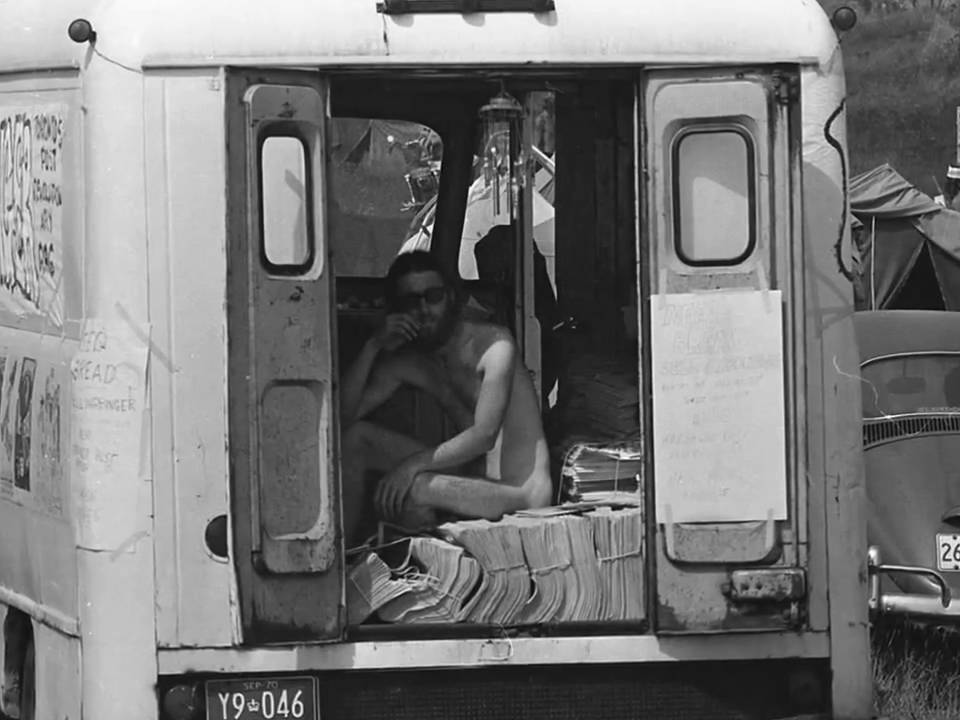 From Aug. 7 and Aug. 10, 1970 The Strawberry Fields Festival was held Mosport Park Raceway in Bowmanville, Ontario, Canada. Although accounts vary, the audience has been estimated at between 75,000 and 100,000 people. A three-day ticket for the festival sold for $15.00.

(from wikipedia, edited) Originally, promoter John Brower along with John Lennon and Yoko Ono had planned to host the “Toronto Peace Festival” at Mosport Park in July 1970 but they ran into numerous roadblocks and their plans were dashed when their application for the necessary permits were denied. In de-classified documents released in 2007 it was revealed in an RCMP (Royal Canadian Mounted Police) report dated Dec. 30, 1969 that the Canadian security service began spying on ex-Beatle John and Yoko after they announced their plans for the Peace Festival.

Without John and Yoko, Brower moved forward with plans to host a festival in Moncton, New Brunswick, named the “Strawberry Fields Festival”. Again, local politicians intervened and revoked various permits so Brower shifted the location back to Mosport Park in Ontario only this time he thinly disguised the event as a championship motorcycle race featuring “some contemporary entertainment”. The festival was advertised in Canada as the “First Annual Strawberry Cup Trophy Race”. To avoid public and political scrutiny, the musical entertainment aspect of the event was downplayed in advertisements and the festival was not promoted heavily in Canada.

When it was discovered that the primary focus of the event was not motor cycle racing but instead a rock music festival, the Attorney General of Ontario, Arthur Wishart, filed for an injunction to stop the festival from taking place citing health and public safety concerns. On August 6, with only hours to go before the opening act was scheduled to take the stage, Supreme Court Justice D. A. Keith refused to grant the injunction and the festival was allowed to proceed.

Unlike in Canada, the “Strawberry Fields Festival” was promoted heavily in the U.S. as a three day rock music festival with the slogan, “Love, Sun and Sound”. As a result, a large percentage of the attendees were from the American north east. Others travelled from as far away as California and Florida. In the end, the sanctioning body for the racing series withdrew its drivers from the event so an actual race never occurred although an obligatory lap by a few motorcyclists did occur in order to comply with the local ordinance.

Several thousand more young American music fans were turned back at the Canada–US border by Canadian border agents. (The same time as this festival was going on in Canada, the Goose Lake Festival was going on in Michigan. The people from Canada who were trying to get to Michigan were having the same problem crossing the border) The fans were unable to provide proof they had sufficient funds to look after themselves while visiting Canada or produce adequate identification. Forty US dollars were required to be shown to officials (at the Thousand Islands Bridge crossing checkpoint). If one could not show cash they were told they could not enter Canada. Cash was sometimes borrowed from person to person at the lineup. One person turned away at the Canadian border crossing at Prescott, Ontario, drowned while attempting to swim into Canada across the St. Lawrence River near Watertown, New York. Several arrests related to the attempted importation of narcotics and banned substances were made.

Led Zeppelin and Leonard Cohen were listed on the bill but did not appear.

Were any of you at this festival 48 years ago? And if so, do you remember anything about it?

Here is a video we found that someone made about the festival:

Strawberry Fields Festival at Mosport Raceway August 1970. Music was “I’d Love to Change the World” by Ten Years After who performed at the festival, however…

When Axl Rose Threatened to Cancel a Show Over Traffic Ticket